A Review Of literature

Source : Me
If you're interesting in learning more about the topic, feel free to check out the sources in this review of literature either as you read (by clicking on the numbers in parentheses) or after you've finished reading (by clicking on the numbers in the Works Cited section below).
Throughout the years, education is commonly depicted as the great equalizer, that it can bridge the gap between rich and poor. The message that having a college degree can improve one's future is nearly ubiquitous. In fact, the government tends to spread this message to students and parents alike from as early as elementary school. However, in reality, there is a possibility that it has contributed to the growing income inequality,  as "Higher education is not currently supporting equal opportunity and social mobility as much as it should."(6) 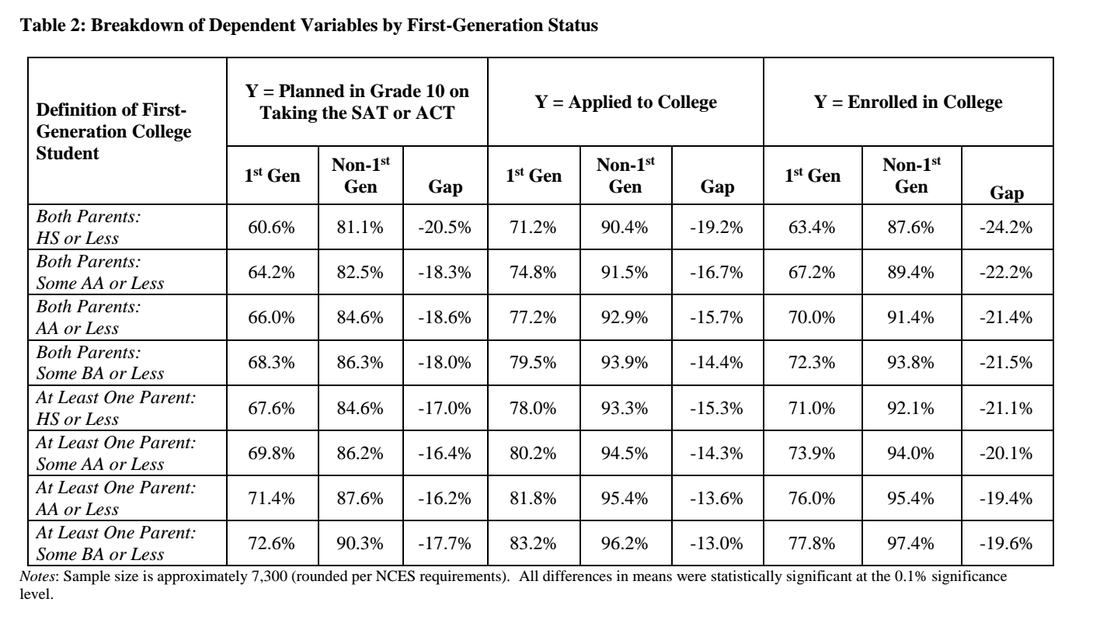 Table from: "Talking ‘Bout My Generation: Defining ‘First-Generation Students’ in Higher Education Research" (11)
Regardless of how they're defined, first-generation students tend to be significantly less prepared to succeed when it comes to college. As shown above, the more education each parent has, the more likely it is for the student to succeed. Just having one parent with a bachelor's degree, can raise a student's chances of success. Furthermore, even if at least one parent did not get a bachelor's degree, students tend to be more successful, the more educational experience each parent has. Therefore, it is essential that there is early intervention from as early as middle school, when students start to take the PSAT, in order to bridge the gap.

4) Engle, Jennifer, and Vincent Tinto. "Moving Beyond Access — College Success for Low-Income, First-Generation Students." (2008). The Pell Institute. The Pell Institute for the Study of Opportunity in Higher Education, Web. 27 Nov. 2016.